Native American podcasts are some of the best opportunities to dive into some excellent indigenous storytelling. And the best part is, you can listen in on your commute, during your workout or when you're just relaxing at home. We've compiled a list of a few of our favorites for your listening pleasure. Have a favorite that's not on this list? Let us know! We'd love to spread the word!

Without further ado, here are 12 Native American podcasts that you should definitely be listening to:

Photo courtesy All My Relations

The “All My Relations” podcast is hosted by two amazing women and storytellers: Matika Wilbur, from the Swinomish and Tulalip peoples of coastal Washington, and Adrienne Keene, a citizen of the Cherokee Nation. Together, they explore what it means to be a modern Native individual.

They speak on representation and how Native peoples are represented—or rather misrepresented—in mainstream media. Between them, they have decades of experience working in and with Native communities, and writing and speaking about issues of representation.

Listen to the podcast and follow Matika Wilbur and Adrienne Keene on social media.

“This Land” is hosted by Rebecca Nagle, a citizen of the Cherokee Nation and an Oklahoma journalist searching for the truth.

This Crooked Media production sheds light on the two separate crimes that were two centuries apart, which consequently played a part in a 2020 Supreme Court decision. This podcast provides an in-depth look at how a cut-and-dry murder case opened an investigation into half the land in Oklahoma and the treaty rights of five tribes.

Follow each of the 10 episodes to understand the history behind this case and learn about the outcome of the Supreme Court decision.

This podcast, hosted by Nick Estes and Jen Marley,  features discussions on indigenous history, politics, and culture from a left-leaning perspective.

“Red Nation” as a whole is dedicated to advocacy, education, and bringing indigenous issues to the forefront of politics to hopefully create action.

The website TheRedNation.org provides a blog, information about the “10-Point Program,” resources to become more politically aware, and ways in which you can support them.

There are at least 100 episodes available for your listening pleasure. 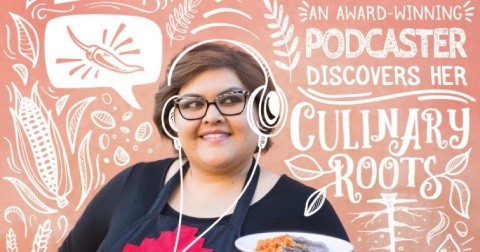 Hosted by Andi Murphy, a Navajo journalist, “Toasted Sister” takes us along on Murphy's journey to discover her culinary roots. This award-winning podcast documents the Native American Food Movement.

On her website, Murphy provides cooking demonstrations, delicious Native recipes, and even a list of Native-owned food companies throughout the United States that you can support.

Murphy currently has 73 episodes that you can dig into, including her latest installment, “Food Poetry.” If you love food (who doesn't?) and you love Native American podcasts, this one's for you.

Follow her on social media to get updates on her movement and new ideas for recipes.

The first season takes a look into a cold case—the disappearance and murder of a beloved woman, Alberta Williams. The second follows the devastating story behind a Saskatchewan family’s missing child and sister, Cleo.

Walker is from the Okanese First Nation in Saskatchewan and currently lives in Toronto.

Listen to both of these fascinating stories as Walker speaks to friends, family, and law enforcement to help get a better understanding of these cases.

Follow Connie Walker on social media for more updates on what she's working on.

Host Ryan McMahon (Anishinaabe/Metis) is based out of Winnipeg. His theater degree and experience with Second City Conservatory in Toronto are evident in “Red Man Laughing” as he welcomes his listeners to the future of indigenous storytelling.

McMahon’s network, the Indian and Cowboy Podcast Network, has been around since 2014 and is still going strong.

He says: “We mentor new podcasters. We develop indigenous podcast projects. We shout from the top of our lungs, we’re still here and our stories matter.”

In addition to the podcast, in 2012 he became the first Native person to record a mainstream comedy special. Follow him on his site, RMComedy.

“Media Indigena” is a weekly podcast that began in 2016 with host Rick Harp, a veteran of broadcasting. This is one of the most unique Native American podcasts in that it employs a roundtable approach.

The purpose of “Media Indigena” is to dive into headlines affecting indigenous people and communities and to have open and honest conversations surrounding them. The host and producer, Rick Harp, is from the Peter Ballantyne Cree Nation, in what is now known as northern Saskatchewan.

Start listening to their Summer Series and follow Media Indigena on social media.

The creative and spunky hosts of “Métis in Space,” Molly Swain and Chelsea Vowel, will take you on an adventure “as they drink a bottle of (red) wine, and from a tipsy, decolonial perspective, review a sci-fi movie or television episode featuring indigenous peoples, tropes and themes.”

Swain is from Calgary and Vowel is from the Plains Cree and Michif-speaking community of Lac Ste. Anne, Alberta.

Both women are educated, quirky, and love science fiction. It's one of the most entertaining Native American podcasts out there, for our money.

Browse through their five seasons or check out their blog.

The “Unreserved” team offers real talk from the people behind the headlines, with a soundtrack from the best in Indigenous music. “Unreserved” airs on CBC Radio One and SiriusXM.

Go to CBC Listen to stream all episodes!

10. The Secret Life of Canada

In “Secret Life of Canada,” Falen Johnson hosts yet another wonderful show along with co-host Leah-Simone Bowen, both of whom are based out of Toronto.

“‘The Secret Life of Canada' highlights the people, places, and stories that probably didn't make it into your high school textbook.”

Listen to the podcast through CBC and access educational resources as well.

Join show host Vincent Schilling, an enrolled member of the St. Regis Mohawk Tribe, award-winning photojournalist, book author, public speaker and Executive Vice President of Schilling Media, Inc. and co-host Delores Schilling, CEO and President of Schilling Media, Inc., as they talk to best and the brightest, the movers and shakers—and of course—Native Trailblazers. Past episodes include conversations about Native mascots and imagery in the NFL, chats with Native Comedian Joey Clift and Native Marvel Artist Jeffery Veregge, and tons more!

Native America Calling is a live call-in program linking public radio stations, the Internet and listeners together in a thought-provoking national conversation about issues specific to Native communities. Each program engages noted guests and experts with callers throughout the United States and is designed to improve the quality of life for Native Americans. Native American Calling is heard on nearly 70 public, community and tribal radio stations in the United States and in Canada. Our program is a production of Koahnic Broadcast Corporation, a Native-operated media center in Anchorage, Alaska.

Did you know Powwows.com has its very own podcast? Hosted by Paul Gowder the creator and owner of PowWows.com, “Pow Wow Life” brings you exclusive interviews and updates from across Indian Country. Tune in for conversations with your favorite singers, dancers, and tribal and business leaders from across North America. You won't be disappointed!