Have you visited the Disney parks?

Have you noticed any of these references?

Be sure to listen to the WDW Radio episode for all of the references we discussed!

Disney hasn't always had the best history with their handling of Native culture.  I'm talking specifically about Peter Pan and Pocahontas.  In recent year, Disney has tried to incorporate more authentic Native influences.  Disney is a company that tells stories.  While they don't always get it right, they do try to tell credible stories.

Related – Ready to plan your Disney trip?  We can help!

Lou and I discussed lots of places you find Native references and influences.  Below are a few of my favorites!

The Wilderness Lodge is our families favorite place to stay while in Walt Disney World.  The lodge is styled after log cabins and lodges in the Northwest.

When you walk into the lobby you come into the cavernous atrium with huge logs and stone fireplace the climb to the high ceiling.  Throughout the lobby, there are countless pieces of Native culture.

On my first visit to the lodge, I dragged my wife around the lobby exploring all the details.

Looking into the expanse of the atrium you can see tipis hanging as lights. 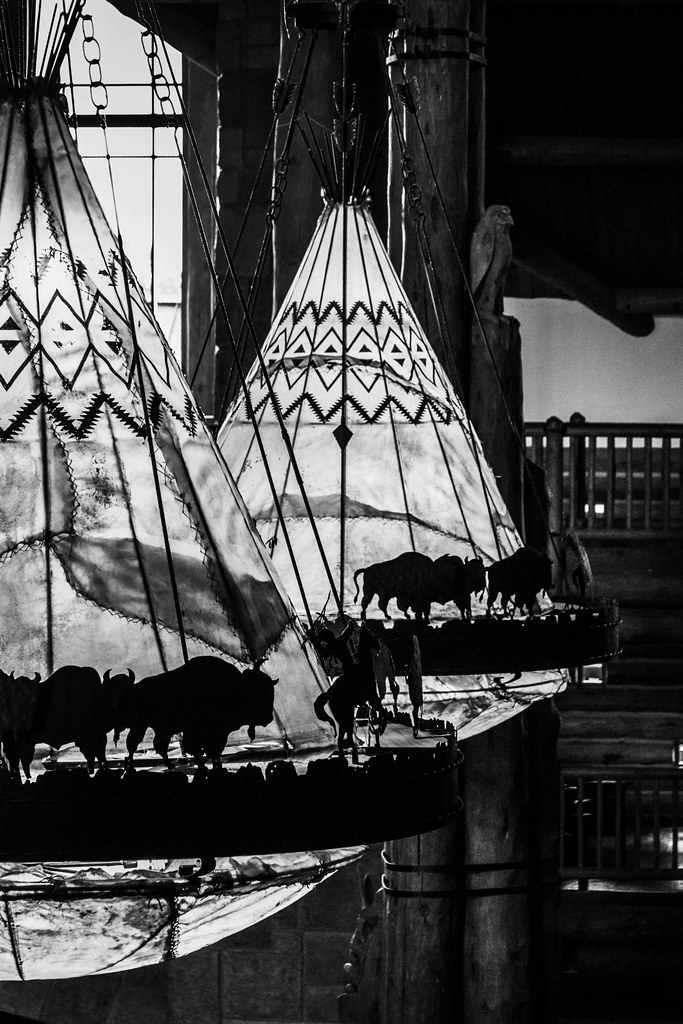 Moving your eye around the walls of the atrium you can find totem poles built into the structure of the lobby.

The floor of the lobby shows a Hopi storm pattern with the four directions pointing to these four totem poles.

As you move on past the grandeur of the lobby, you start to see smaller details of Native culture.  While building the lodge, Disney commissioned artists to create replicas of historic Native artifacts.  These are displayed in glass cases scattered around the lobby. 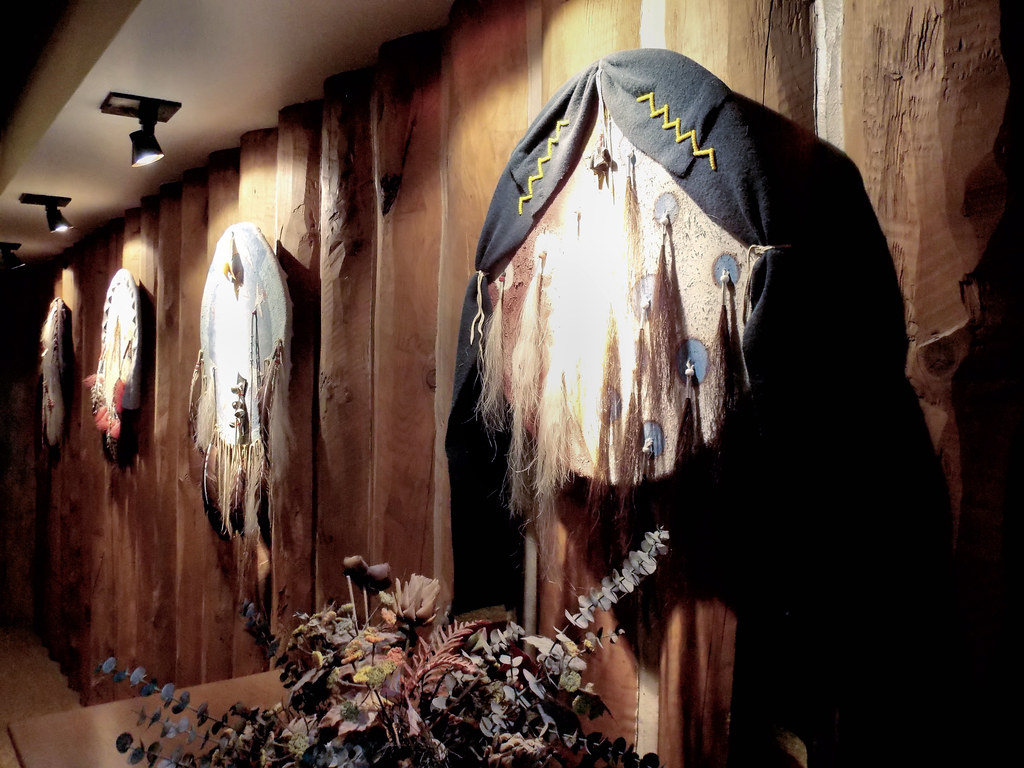 The American Adventure is the keystone of the World Showcase in Epcot.  The pavilion features an audio-animatronic show telling the story of America.

On your next trip to Walt Disney World, plan to spend some time at the American Adventure – there is so much to see.

In the lobby of the pavilion, you will find quotes from famous American.  One of these quotes is from Chief Joseph.

One of my favorite items of Native culture in the American Adventure is unfortunately no longer there.

John Herrington beaded mission vest from his time on the Space Shuttle was on display. 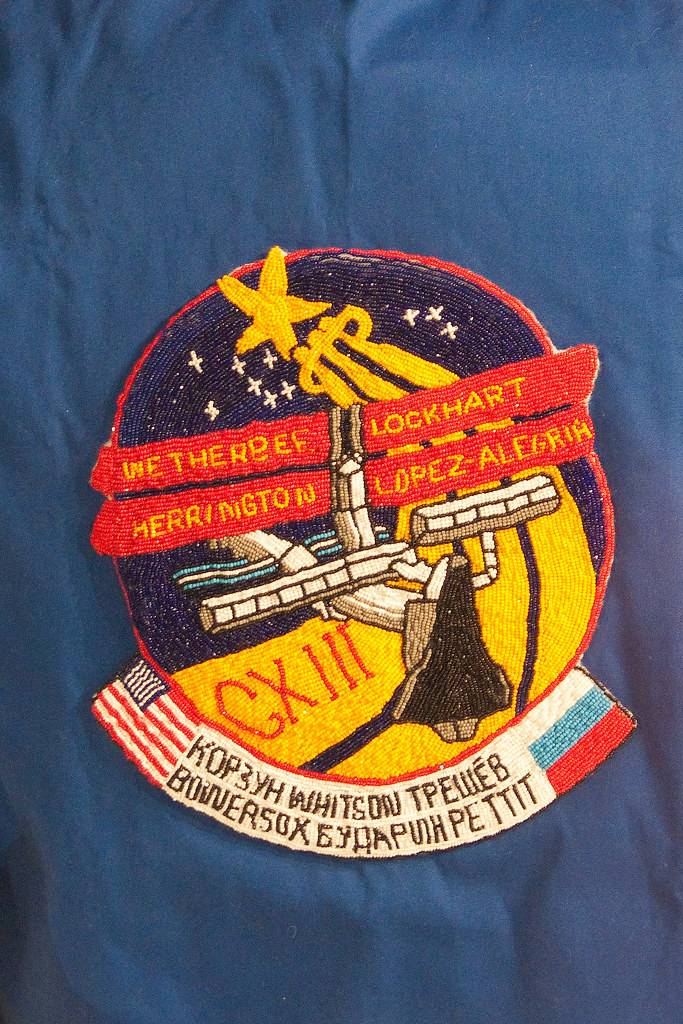 During the American Adventure show, Chief Joseph is shown giving his famous speech.

The exhibit's Grand Opening included dancers and singers from the Seminole.

Did you know there is a Buffalo Bill show at Disneyland Paris?

As a Disney fan, I love seeing the ways people can connect with Native culture in the parks.  And as someone who builds ways for people to explore Native culture with PowWows.com, I absolutely love that Disney takes the time to tell authentic stories with Native culture.  Again, yes Disney doesn't always get it right with cultural references.  The idea that a young child will feel a connection to something they saw on vacation, then when they return home looking for more info to me is incredible.  Thousands of people will go through the American Heritage Gallery and leave inspired by Native artwork!

What are your thoughts about the Native American references at Walt Disney World?

I am the host/producer of WDW Radio, which was named Best Travel Podcast for 9 consecutive years and ranked #2 overall podcast on iTunes in 2015. I am the author of 102 Ways to Save Money For and At Walt Disney World, two Walt Disney World Trivia Books, and the author/ narrator of seven Audio Tours of Walt Disney World. I am also the founder of the Dream Team Project, which sends children with life-threatening illnesses to Disney World through the Make-A-Wish Foundation of America, and thanks to the incredible efforts and generosity of others, collectively we have raised more than $250,000 to date.

The thing about Peter Pan is that those aren’t even Native Americans. They’re Neverlandians. Neverland itself is supposed to be a British child’s fantasy land. It’s also worth pointing out that Pocahontas isn’t meant to be a biopic, and even when comparing it to actual biopics, it’s still more justice to the source material than some that love using “based on a true story. inspired by a true story” and other such taglines (ex. The Last King of Scotland, Dangerous Minds, and more).

On another note, will there ever be an article about Native Americans in Japanese anime? Although the Japanese are not familiar with them, to put it lightly, they show up quite regularly in Japanese anime: Geronimo, Jr. from Cyborg 009, the Patch Tribe from Shaman King, and I think there was a Digimon human character who was Native American as well.

I didn’t realize there were Native references in anime-interesting topic!

Thank you again for joining me, Paul! I really enjoyed sharing the references in the parks, and learning a lot from you along the way as well!