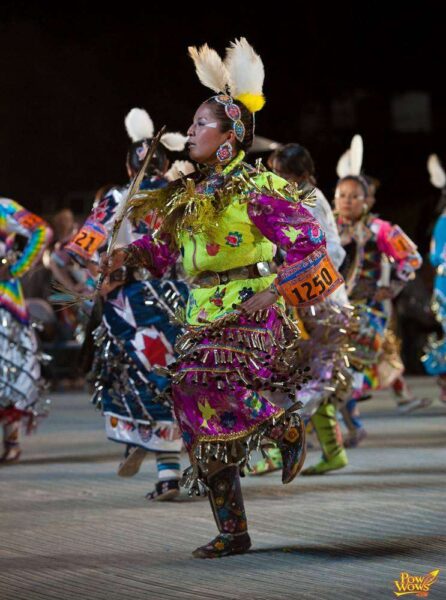 The Jingle Dress Dance is commonly seen in competitive pow wows, performed by women and girls in First Nations and Native American communities.

The dance gets its name from the rows of metal cones—called “ziibaaska’iganan”—attached to their dresses, which make a distinctive sound as they dance. The ritual has a rich history, and there are few sights as mesmerizing as watching and hearing the women perform the light, elegant dance style in their Jingle Dresses.

Read on to learn everything you need to know about the Jingle Dress Dance.

History of the Jingle Dress Dance

The Jingle Dress Dance began with the Mille Lacs Band of the Ojibwe Tribe in the early 1900s and became prevalent in the 1920s in Wisconsin and Minnesota (Great Lakes region) in the US and in Ontario, Canada.

The story is that the dress was first seen in a dream. A medicine man’s granddaughter grew sick, and as the man slept his Indian spirit guides came to him and told him to make a Jingle Dress for the little girl. They said if the child danced in it, the dress would heal her.

The Jingle Dress was made, and the tribe came together to watch the child dance. At first, the child was too sick to dance alone so her tribe carried her, but after some time, the little girl was able to dance alone, cured of her sickness.

It’s likely that the sickness the little girl was experiencing was a part of the 1918 flu pandemic, which hit the Native American communities hard close to the Great Lakes. This was closely followed by a federal ban on ritual dancing at Indian reservations in the 1920s. The dance has since been not only a ritual of healing but also one of pride.

Back in 2018, the Mille Lacs Indian Trading Post and Museum even launched an exhibit with photos commemorating the epidemic and the 100th anniversary of the dress and dance. The exhibit, which sheds light on the history of the Jingle Dress and Dance, was developed in partnership with the University of Minnesota Department of American Studies and the Mille Lacs Ojibwe community.

Though the dance started with a grandfather and a little girl more than a century ago, the style is now performed competitively and in ceremonies by women and girls of all ages.

Jingle Dresses, also known as Prayer Dresses, are believed to bring healing to those who are sick. As mentioned above, the dance gets its name from the rows of ziibaaska’iganan (metal cones) sewed to the dress. These cones are traditionally made from rolled snuff can lids and hung from the dress with ribbon close to one another, so they make a melodic sound as the girls and women dance. Traditionally, the dress is adorned with 365 visible jingles, or cones. Nowadays, these cones are often machine-made. The dresses come in every color imaginable, from yellow to bright blue, to deep red, and accented with sparkles and even neon-colored fabrics. They are often made with shiny and sparkly materials and decorated with fringes, embroidery, beading, and more.

They usually have three-quarter length to full-length sleeves and come down to mid-calf or the ankle. They are secured at the waist with a thick belt, often made of brown leather. On their feet, the dancer wears decorative moccasins embellished with the same kind of detail found on their dresses.

Traditionally, the dresses were often made from old formalwear and other repurposed dresses and didn’t include the decorative beadwork, or the beaded leggings we see today on and beneath the dresses.

What are the steps for the Jingle Dance?

As the ziibaaska’iganan hit one another it sounds like rain falling, so it’s important for the dancer to be light on their feet, to move in time with the drum and stop when the beat stops. They keep their foot movements low to the ground while dancing, kicking their heels and bouncing on their toes to the music. Typically, this dance is done in a zigzag pattern, said to represent one’s journey through life—or so the story goes.

Often, they keep their hands on their hips, and if they are dancing with a feathered fan (full of neutral colors, like eagle feathers) as the more modern Jingle Dress Dancers do, they will raise it into the air as they dance to receive healing. The traditional Indian dance involves low, soft-footed steps, as could be performed by those who were sick, while the modern competitive dancers push the boundaries some as they try to out-dance their competitors. The manner in which the dance has evolved has built firmly on its origin story.

What are the songs and music for Jingle Dance?

The music for this style of dancing has a foundation of a solid drumbeat, and of course, the metal cones make a loud jingling (hence the name) as the women move, which contributes to the music you’ll hear at a Jingle Dress Dance.

Jingle Dancers will usually dance to Northern drum groups. Special songs for Jingle Dance include a Side Step or Crow Hop. […] the 1920s, it was practiced throughout Wisconsin, Minnesota and Ontario, Canada, according to […]

[…] different powwow occasions which have seen a web-based resurgence is the jingle dress dance, an Ojibwe custom normally carried out by teams of ladies carrying skirts adorned with tinkling […]

Native Americans Use Technology to Keep Traditions, Language Alive During Pandemic – The Importance of Medical