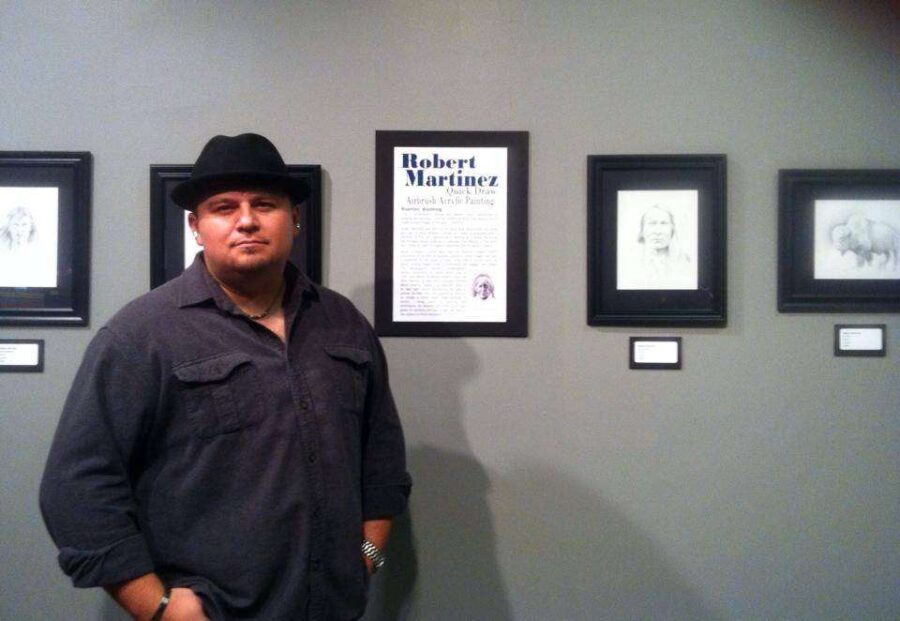 Robert Martinez expresses his heritage though his art! “Long Long Ago” by Robert Martinez

Northern Arapaho Artist,Robert Martinez, paints and draws evocative art. He never limits himself, choosing to capture Natives in historical,present day and futuristic contexts. He shares his artistic journey in this interview. DK: Thank you so much for sharing your time and talent with us today! What does it mean to you to create such masterpieces?
RM: Well, I don’t set out to create a “masterpiece”.  I just have a thought or get an idea that I’d like to see realized on paper or canvas.  I’ll take that idea and make a sketch of it and if I like that image enough I’ll transfer it to canvas and paint it.  Sometimes the finished piece is “so-so” but sometimes I’ll look at the end product and be amazed myself at what I created.
DK: Will you tell us about your very first experience creating one of your pieces? How did it feel to start on such an intricate piece? What was the feeling you remember when you completed it?
RM: For quite a long time in my early career, I would work very fast.  Perhaps 3-4 hours for a medium size full color oil painting.  About 10 years ago, I envisioned a large painting depicting the historical leaders of the Arapaho Tribe, so I set out trying to find as many good reference photos as I could.  During the search, I found out about Tribal leaders I’d never heard of and had to request copies of photos from different museums for their image.  That research process took about 2 years.  After I’d had all the images I wanted, I painted a large 4ft x 4ft panel, taking about 3 months to finish it. It turned out exactly as I wanted it to and I was so happy that all the time and effort paid off.  That project taught me to slow down, put more thought into each piece.
DK: When you think of all the art you have created, which pieces stand out or have certain memories attached to them? Please tell us some of your favorite stories?
RM: The piece and story earlier definitely sticks in my mind.  One of the others is a painting I did that’s mostly in hues of violet with a warrior whose face is painted to resemble the American flag.  I’m a very big supporter of our Veterans and that piece is for them and their sacrifice.  I’ve had many American veterans of all cultures thank me for creating that image. Interestingly, that image has garnered some of the most heated debate from First Nations People in Canada.  I’m not familiar with all the specifics of the issues they face in their country with their government, but some of them couldn’t reconcile the image of a Native with a painted face similar to the American Flag.
DK:  What do you think is the most important aspect of your work?
RM: Communication.  All Art is about communicating something between people.  My current work focuses on the fact that Modern Indigenous people are not only influenced by modern pop culture and technology but also still greatly influenced by their historical culture. We are constantly walking in between two worlds.
DK: What life lessons have you learned and what personal traits have you developed through your creations?
RM: People.  Get to know people.  The biggest lesson I’ve learned is that the more people you get to know, the more you learn from them, the more they learn from you.  I’d guess 97% of the success I’ve had as an artist has come either directly or indirectly from other artists, or people who work in the art field after I’d gotten to know them.
DK: Has your career as an artist changed you?
RM:By Nature,I’m a fairly shy person.  I like to let my artwork speak for me, but that isn’t always possible.  Traveling around the country talking to different artists, customers, all has definitely forced me to become more outgoing.
DK: What does your tribal culture mean to you in your art? In your every day life? What are some of the Native values that influence your art?
RM: Though I'm a mix of Spanish-Mexican, Scots-Irish, French-Canadian and Northern  Arapaho, it's The Northern Arapaho culture, both past and present, that is a main theme in most of my work.  Along with being an artist I also work for my tribe helping Arapaho families and youth as the Northern Arapaho Tribal Child Support Director.  I see the issues and problems our people face everyday trying to reconcile our historical past with modern day problems.  I try to illustrate some of those issues in my work.
DK:  What else would you like to share with us today? We sure do appreciate you! Thank you for your consideration and for your time!
RM; If you’d like to see more of my work you can visit my website:  www.martinezartdesign.com ! On there, you can find links to my facebook page or if you're interested in purchasing any of my work, you can find links to do that, too. Thanks for liking my Artwork!